Battle of the Atlantic Place

Our team ranked #1 in the design portion of a competition to design a new home for Canada’s National Naval Memorial with accompanying interpretive exhibits, memorial spaces and an urban design to suit its intended prominent home on Halifax’s burgeoning waterfront. The team developed multiple scenarios through close work with the Canadian Naval Heritage Trust and based on three approaches to managing the long-term preservation of HMCS Sackville, the last remaining Canadian-made corvette from WWII and Canada’s National Naval Memorial. Each of the three methodologies for sheltering and displaying the ship led to different urban and architectural approaches. The entire facility was designed to tell the story of HMCS Sackville and the Battle of the Atlantic.

In The Convoy scheme, each of the three main programmatic components, the Shiphouse, the Interpretive Centre and the Memorial Hall, is housed in a distinct volume. These elongated bars then shift apart as they respond to the dynamic influences of city and harbour. This design was based on a heavylift docking system for HMCS Sackville.

The Shipyard scheme is conceived as a two-bar arrangement with a covered central arcade celebrating Halifax’s maritime heritage and functioning as an activity space for the entire city. A glazed enclosure to the south provides full profile views of HMCS Sackville from the approach along the boardwalk from the cruise ship terminal. This design was developed using a shiplift with lateral transfer.

The Gateway (Crossing the Bar) approach recalls the historic gateway arch which used to stand on Sackville Landing and the temporary arches that were traditionally built across streets and at Grand Parade in Halifax to celebrate victories in battle or visiting royalty. The Shiphouse, oriented parallel to the shoreline, is located at the eastern edge of the site, as far out in the harbour as possible. A corresponding structure containing the interpretive and memorial functions rises along the boardwalk. The large opening carved from its mass frames full profile views of HMCS Sackville from the city. This design is based around utilizing a graving dock which allows HMCS Sackville to remain at a natural waterborne elevation. 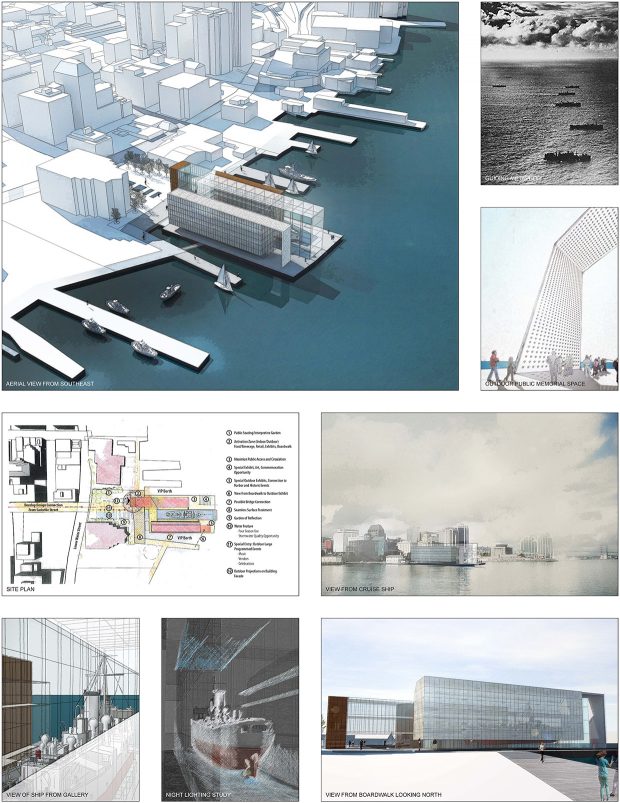 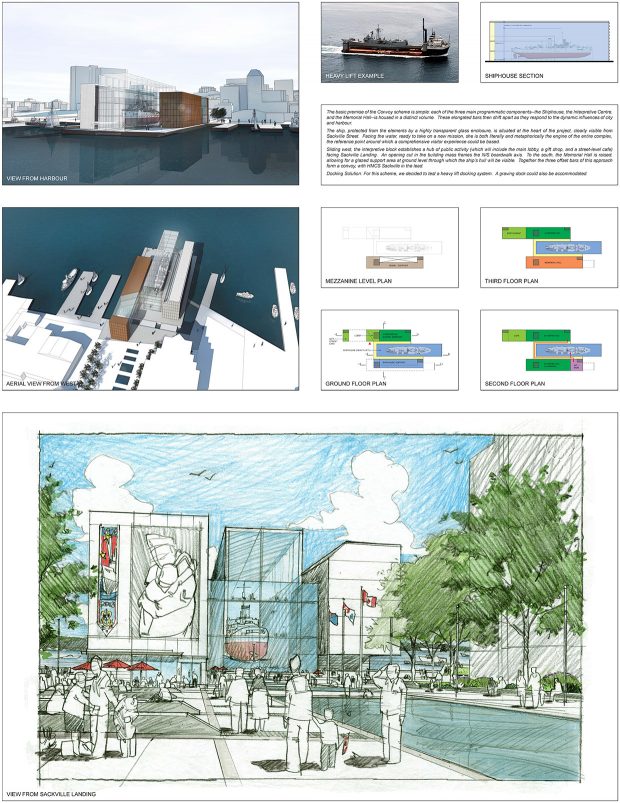 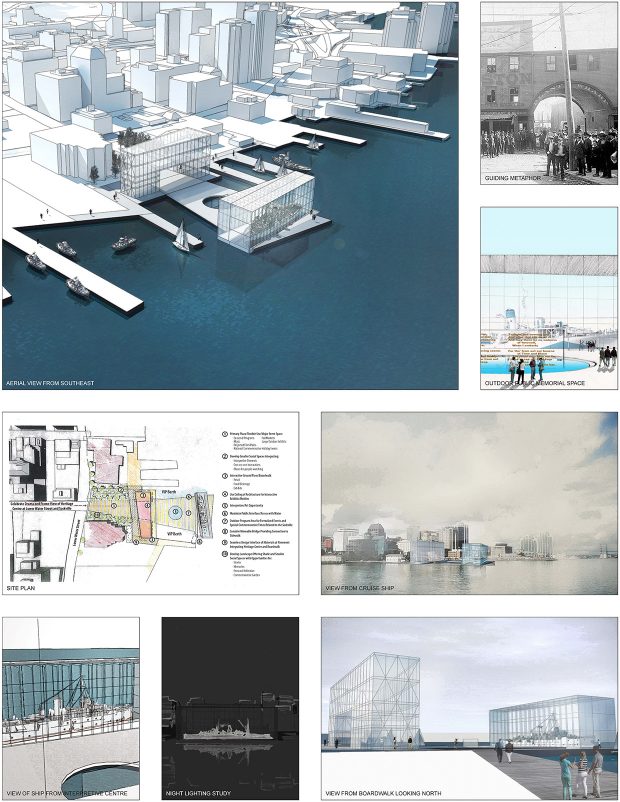 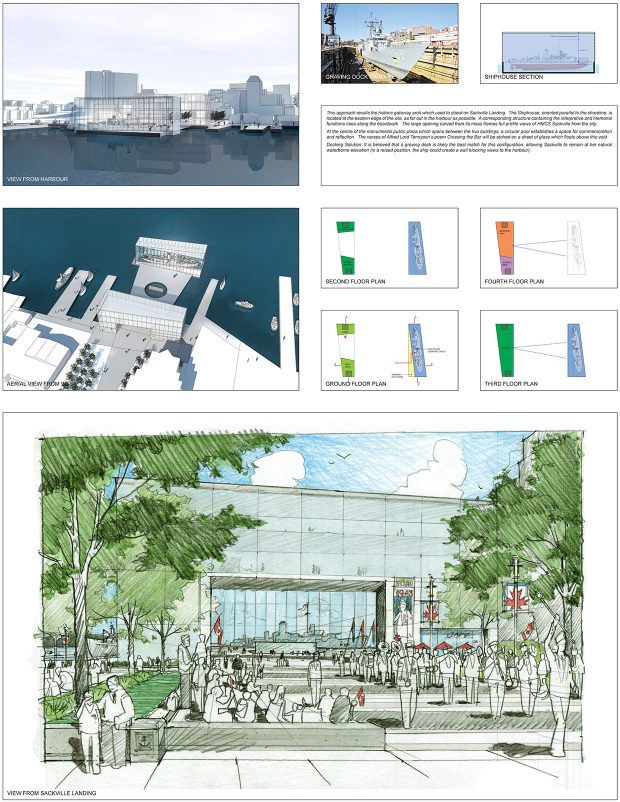 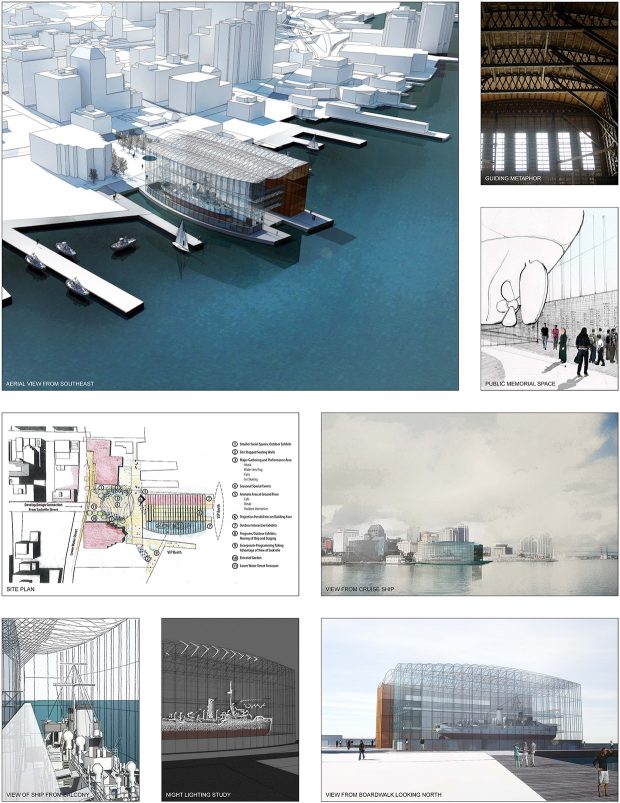 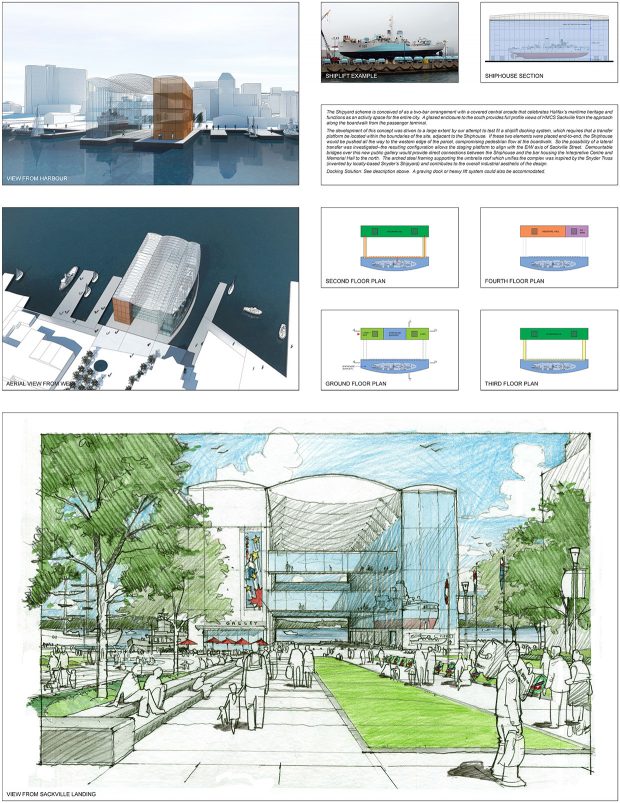