New security and reception desk in the foreground

Photographs of the space before the renovations started

Pratt & Whitney Canada Corp. (P&WC), based in Longueuil, Quebec, is a global aerospace leader, shaping the future of business, helicopter and regional aviation with new generation engines. Approximately 12,000 aircraft operators around the globe depend on PW&C’s engines to power their aircraft and helicopters. They currently have more than 52,000 engines in service in over 200 countries and territories.

At the P&WC plant in Halifax, components for its new PurePower PW800 engines are manufactured among other items like engine blades.

As part of ongoing improvements, PW&C retained Nycum to design upgrades to its Lobby. The project addressed a number of functional and aesthetic issues as well as new security processes, upgrades to the exterior envelope and the creation of welcoming spaces for its guests and customers.

To convey the focus on precision, quality and safety – hallmarks of a jet engine maker – we worked closely with PW&C leadership to develop a restrained interior palette that favoured light colours and interesting textures that balanced organic materials and precision manufacturing. Large format tiles were introduced with a subtle pattern, wrapping floors and walls and neutral backgrounds allowed the inherent beauty in walnut to come through in the cabinetry and wood doors. Area rugs and carpet were used to warm up waiting and work spaces with tone on tone texture underfoot.

We re-worked the entry sequence to introduce new security gates and an improved flow for employees and guests. New waiting areas with comfortable furniture were developed and a guest washroom was re-worked and re-oriented to enhance convenience and privacy.

We worked with PW&C’s branding and signage consultant to integrate corporate standards into the interior of the space – important corporate values are expressed and integrated with the palette and layout and a fully glazed wall was added to an existing meeting and interview room providing a blank canvas for a luminous abstract interpretation of a PW&C engine.
The exterior upgrades feature a new glazing system that emphasizes vertical lines to pay homage to the béton brut finish of the existing building while highlighting the precision and dependability that are fundamental to the PW&C brand. The cladding of the entry canopy was replaced with new stainless steel panels that reference the very technical and machined nature of the plant’s work. 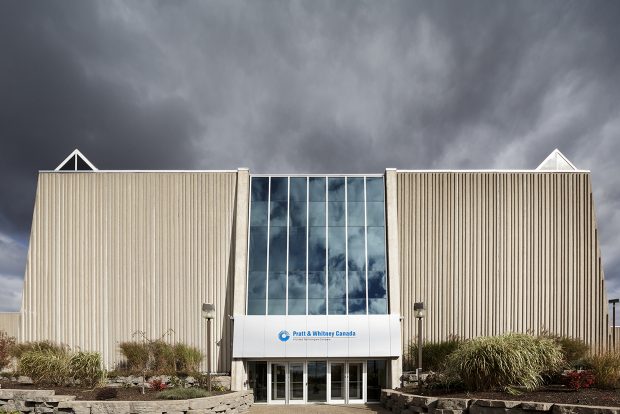 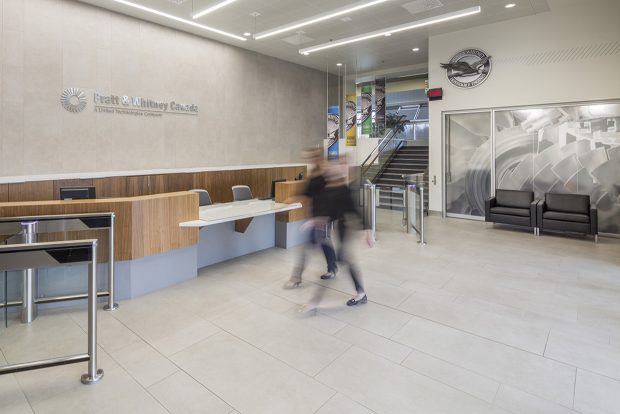 New security and reception desk in the foreground

Photographs of the space before the renovations started 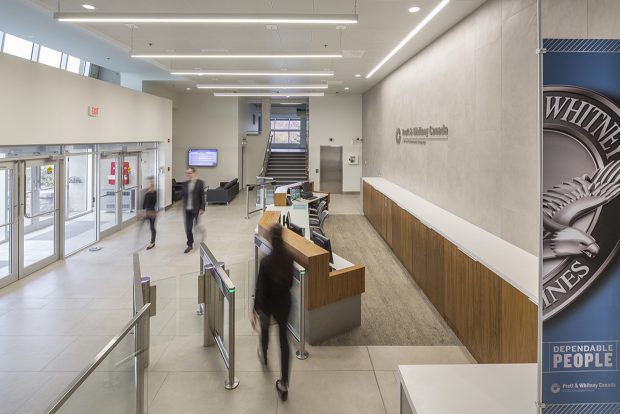 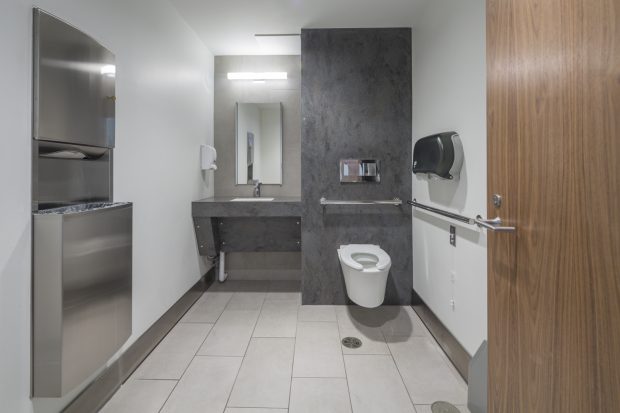